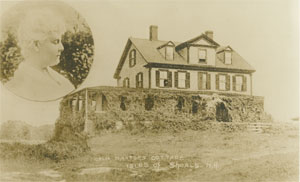 Celia Laighton Thaxter, 1835-1894, was an American poet and prose writer. Born Celia Laighton in Portsmouth, N.H., she spent her childhood on White Island Lighthouse, part of Isles of Shoals, and Appledore Island. At 16 she married Levi Thaxter and had three sons, Karl, John, and Roland. The family spent winters on the mainland in Massachusetts, where Celia felt imprisoned by domestic duties in a city house.
Her first poem, "Land-locked," was published in 1860 and was an immediate success. Soon she became widely published, with poems appearing in Harper's, Scribner's, and the Atlantic. With the means to spend more time at her family's resort on Appledore Island, she enjoyed visits there from prominent artists, literary figures, and musicians. However, her preferred literary subjects continued to be drawn from the natural world. She is best known today for "An Island Garden" and "Among the Isles of Shoals."