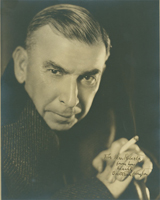 Booth Tarkington, 1869-1946, was a novelist and playwright from Indiana, well known for his stories of life in the midwest.  The Magnificent Ambersons and Alice Adams, for which he won Pulitzer Prizes,  humorously portray the snobbish foibles and hypocrisies of upper class families.  Tarkington attended Purdue University and Princeton, where he was a popular literary and social figure.  His financial success in literature began when The Gentleman from Indiana became a bestseller in 1900.

In 1902, Tarkington won a seat in the Indiana State House of Representatives.  He also served as a trustee for the John Herron Art Museum, having developed an expertise in collecting antique furniture and art.  These experiences provided material for In the Arena: Stories of Political Life and Rumbin Galleries.  Married twice, Tarkington was divorced from his first wife in 1911 and a year later married Susannah Kiefer Robinson, who survived him by twenty years. His only daughter died young, but Tarkington was attached to several nephews and his extended family.  Colby's collection includes a large number of letters from their correspondence.

In later life he divided his time between Indiana and his estate, Seawood, in Kennebunkport, Maine.  There he became close to neighbor Kenneth Roberts and enjoyed sailing his schooner, Regina.  Tarkington's boathouse, "The Floats," now houses the Kennebunkport Maritime Museum.