The art and science dealing with the protection and improvement of community health, prolonging life and promoting health through organized efforts, as opposed to the medical science of preventing disease, or the study of disease in an individual body.

The Danse Macabre became a popular way to represent the Plague in the Medieval Ages, where death would consort with humans, threatening to take them at any time.

Called the worst pandemic of the world's history, Spanish Flu is a close cousin of today's frightful H1N1 virus.  Most influenzas attack the young, old, and those with immune deficiancies. Spanish Flu attacked even healthy young adults, creating a death toll larger than that of World War I.

"The last known natural case was in Somalia in 1977. Since then, the only known cases were caused by a laboratory accident in 1978 in Birmingham, England, which killed one person and caused a limited outbreak. Smallpox was officially declared eradicated in 1979."  -- WHO 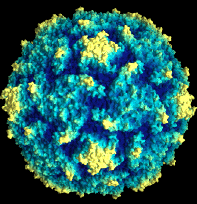 Polio is a viral infection that can cause paralysis and death.  The last naturally occurring case of polio in the US occurred in 1979, but the disease remains a problem in parts of Africa, India, and the Middle East.  -- Mayo Clinic