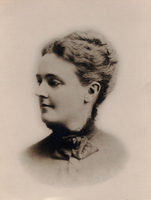 Sarah Orne Jewett was born on September 3, 1849 in the small town of South Berwick, Maine. Throughout her childhood she was chronically ill but in 1865 graduated from Berwick Academy. Her first short story, "Jenny Garrow's Lovers," was published in 1868. During her life, she made several trips to Europe, meeting Rudyard Kipling on one of them. In 1901 she became the first female recipient of an honorary degree in literature from Bowdoin College. She died at the age of 59 in her birthplace of South Berwick. Jewett's works include: Mr. Bruce, Deephaven, A Country Doctor, A White Heron, Country of the Pointed Firs, The Dulham Ladies, and The Tory Lover.