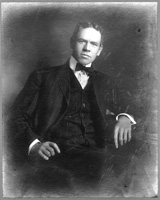 James Brendan Connolly (1868-1957) was an Irish-American author of sea-related stories, novels, and nonfiction such as The Book of the Gloucester Fishermen. Born in South Boston as one of twelve children, he worked as a clerk for an insurance company in Boston and later with the United States Army Corps of Engineers in Savannah, Georgia. He attended Harvard and was a medal-winning athlete in the first modern Olympics, held in Athens in 1896, winning the triple jump, placing second in the high jump, and third in the long jump. Connolly became an authority on maritime writing, after spending years on many different vessels, fishing boats, and military ships all over the world. He participated in the Siege of Santiago (Spanish-American War) as a member of the 9th Regiment, ran for the 12th Congressional District (South Boston) seat as a member of the Progressive Party in 1914, and worked as a correspondent for such publications as Scribner's, Harper's and Collier's.