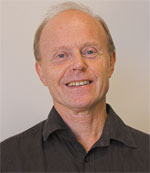 'Justice and Borders' in F. D'Agostino and J. Gaus (eds), The Routledge Companion to Political and Social Philosophy (London: Routledge).

'Will Kymlicka on Multicultural Citizenship in Multination States: A Response', Ethnicities, 11, 303-7.

'On Nationality and Global Equality: A reply to Holtug', Ethics and Global Politics, 4, 165-71.

'Why Immigration Controls are not Coercive: A Reply to Arash Abizadeh', Political Theory, 38, 111-20.

'Against Global Democracy' in K. Breen and S. O'Neill (eds), After the Nation: Critical Reflections on Post-Nationalism (Basingstoke: Palgrave Macmillan).

'In Defence of Weighting: A Reply to Robert van der Veen', Critical Review of International Social and Political Philosophy, 13, 561-66. 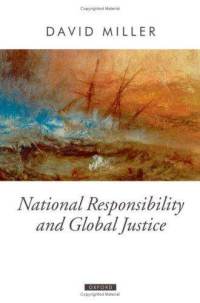 "This book presents a non-cosmopolitan theory of global justice. In contrast to theories that seek to extend principles of social justice, such as equality of opportunity or resources, to the world as a whole, it argues that in a world made up of self-determining national communities, a different conception is needed. The book presents and defends an account of national responsibility which entails that nations may justifiably claim the benefits that their decisions and policies produce, while also being held liable for harms that they inflict on other peoples. Such collective responsibility extends to responsibility for the national past, so the present generation may owe redress to those who have been harmed by the actions of their predecessors. Global justice, therefore, must be understood not in terms of equality, but in terms of a minimum set of basic rights that belong to human beings everywhere. Where these rights are being violated or threatened, remedial responsibility may fall on outsiders. The book considers how this responsibility should be allocated, and how far citizens of democratic societies must limit their pursuit of domestic objectives in order to discharge their global obligations.

The book presents a systematic challenge to existing theories of global justice without retreating to a narrow nationalism that denies that we have any responsibilities to the world's poor. It combines discussion of practical questions such as immigration and foreign aid with philosophical exploration of, for instance, the different senses of responsibility, and the grounds of human rights."
-Publisher 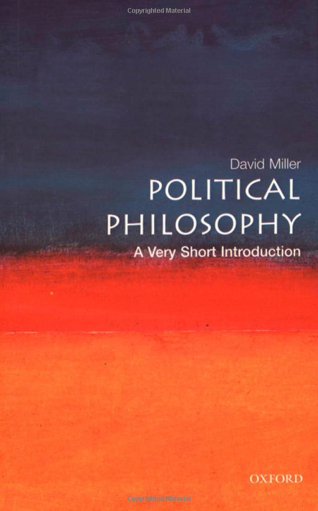 "This Very Short Introduction introduces readers to the key concepts of political philosophy: authority, democracy, freedom and its limits, justice, feminism, multiculturalism, and nationality. Accessibly written and assuming no previous knowledge of the subject, it encourages the reader to think clearly and critically about the leading political questions of our time.

Miller first investigates how political philosophy tackles basic ethical questions such as 'how should we live together in society?' He furthermore looks at political authority, discusses the reasons society needs politics in the first place, explores the limitations of politics, and asks if there are areas of life that shouldn't be governed by politics. Moreover, he explores the connections between political authority and justice, a constant theme in political philosophy, and the ways in which social justice can be used to regulate rather than destroy a market economy.

In his travels through this realm, Miller covers why nations are the natural units of government and wonders if the rise of multiculturalism and transnational co-operation will change all this, and asks in the end if we will ever see the formation of a world government." -Publisher 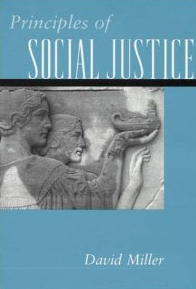 "Social justice has been the animating ideal of democratic governments throughout the twentieth century. Even those who oppose it recognize its potency. Yet the meaning of social justice remains obscure, and existing theories put forward by political philosophers to explain it have failed to capture the way people in general think about issues of social justice. This book develops a new theory. David Miller argues that principles of justice must be understood contextually, with each principle finding its natural home in a different form of human association. Because modern societies are complex, the theory of justice must be complex, too. The three primary components in Miller's scheme are the principles of desert, need, and equality.

The book uses empirical research to demonstrate the central role played by these principles in popular conceptions of justice. It then offers a close analysis of each concept, defending principles of desert and need against a range of critical attacks, and exploring instances when justice requires equal distribution and when it does not. Finally, it argues that social justice understood in this way remains a viable political ideal even in a world characterized by economic globalization and political multiculturalism. Accessibly written, and drawing upon the resources of both political philosophy and the social sciences, this book will appeal to readers with interest in public policy as well as to students of politics, philosophy, and sociology." -Publisher 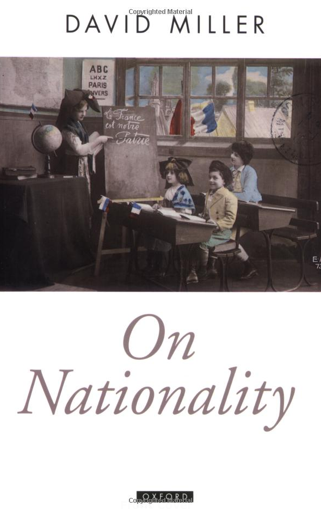 "Nationalism is a dominating force in contemporary politics, but political philosophers have been markedly reluctant to discuss, let alone endorse, nationalist ideas. In this book, David Miller defends the principle of nationality. He argues that national identities are valid sources of personal identity; that we are justified in recognizing special obligations to our co-nationals; that nations have good grounds for wanting to be politically self-determining; but that recognizing the claims of nationality does not entail suppressing other sources of personal identity, such as ethnicity. Finally, he considers the claim that national identities are dissolving in the late twentieth century. This timely and provocative book offers the most compelling defense to date of nationality from a radical perspective." -Publisher 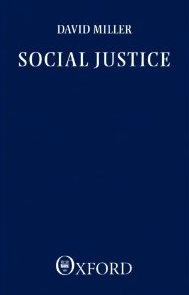