Eighteenth Century Collections Online (ECCO) provides full-text searchable access to the digital images of 150,000 books and other materials published during the 18th Century. Based on the English Short Title Catalog bibliography, it includes English-language and foreign-language titles printed in the United Kingdom, along with thousands of important works from the Americas.

Sabin Americana is an online collection of books, pamphlets, serials and other works about the Americas, from the time of their discovery to the early 1900s containing information about North, Central and South America, the Arctic and Antarctica and the West Indies. This resource offers original accounts of exploration, pioneering, settlement, the western movement, military actions, Native Americans, slavery and abolition. 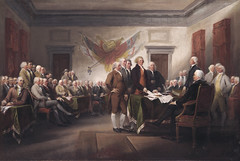 Documents from the Continental Congress and the Constitutional Convention

Search the papers of personages of the time.  Many are included in Early American Imprints above, but print copies may also be available.

Use Library of Congress Subject Headings:

Remember to search CBBcat, MaineCat, as well as national catalogs such as WorldCat and the CRL (Center for Research Libraries).