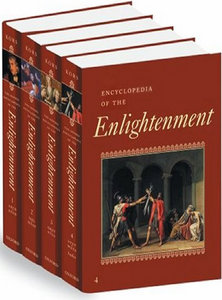 Defining the Enlightenment as the "long eighteenth century," the Encyclopedia focuses on the entire range of philosophic and social changes engendered by the Enlightenment. It extends the conventional geographical boundaries of the Enlightenment, covering not only France, England, Scotland, the Low Countries, Italy, English-speaking North America, the German states, and Hapsburg Austria but also Iberian, Ibero-American, Jewish, Russian, and Eastern European cultures. Nor does the Encyclopedia of the Enlightenment limit itself to major centers like Paris in France and Edinburgh in Scotland, but shares the rich lode of recent scholarship on "secondary" and "provincial" centers such as Berlin and Geneva; Philadelphia and Milan. The Encyclopedia of the Enlightenment brings a similar spirit of inclusion to the new theoretical and methodological approaches that have flowered in the humanities during the past two decades. Including feminist and various post-modernist reassessments alongside more traditional perspectives, the four volumes offer the broadest possible range of current knowledge.