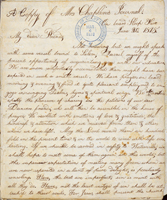 Jeremiah Chaplin was born in Rowley, Massachusetts, in 1776. He graduated from Brown in 1799 where he tutored for two years. He studied theology with Dr. Thomas Baldwin of Boston, and became pastor of the Danvers Baptist Church in 1802. He married Marcia O'Brien in 1806.

Chaplin was chosen as Professor of Divinity by the Board of Waterville College in early 1818. In June the Chaplins and their children took the sloop "Hero" from Boston to Augusta and traveled up the Kennebec River to Waterville by longboat. Mrs. Chaplin describes the journey and reception in a famous journal entry written as a letter to a friend. Chaplin assumed presidency of the college in 1822 and served until 1833. He returned to the pastorate and died in 1841.