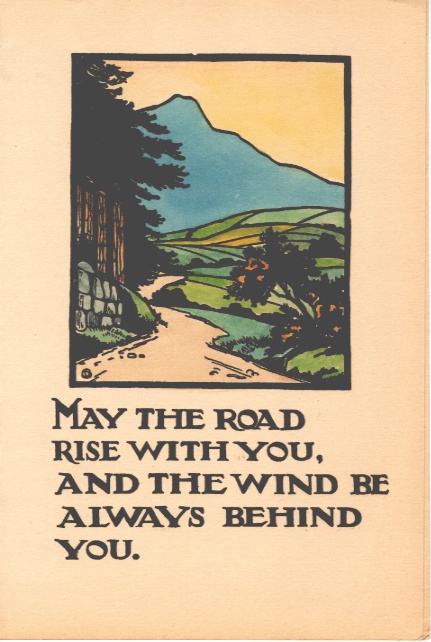 Elizabeth and Lily Yeats, sisters of William Butler Yeats, founded Dun Emer Industries in 1903 with Evelyn Gleeson in order to "find work for Irish hands in the making of beautiful things." They were concerned with the education of working class Irish girls, whom they employed in weaving, embroidery and printing.

In 1908 Elizabeth and Lilly moved away from Dun Emer, taking the printing and embroidery enterprises with them. They moved to a place in County Dublin whose old Irish name was Cuala, the name given to the Press. With W.B. Yeats as the editor, the press published most of the leading writers of the early part of the 20th century.

The Healy Collection contains over 100 Cuala Press titles, described in the library web catalog, and an impressive number of hand colored broadsides and greeting cards also produced by the press.

Cuala Press cards (as shown in the picture) feature hand-colored illustrations accompanied by traditional Irish sayings or text by contemporary Irish writers. Yeats family members contributed many of the illustrations and poems.