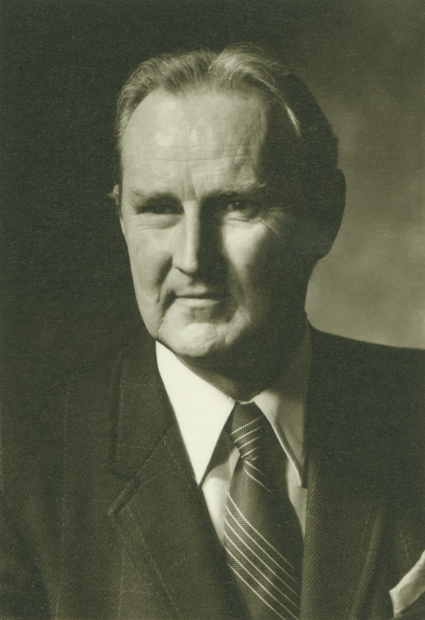 Wallace Anderson was born in Hartford, Connecticut in 1917 where he received his BA and MA from Trinity College. He studied at Harvard before attending the University of Chicago where he received his Ph.D in English Language and Literature, completing a dissertation on Edwin Arlington Robinson.

Dr. Anderson became a professor of English at the University of Northern Iowa (then Iowa State Teachers College) where he published Poetry as Experience and Introductory Readings on Language before becoming the Dean of Undergraduate Studies.

After 25 years, Dr. Anderson left the University of Northern Iowa to become Dean, and eventually Vice President of Academic Affairs, at Bridgewater State College (Bridgewater, MA). Upon his retirement in 1982, his lifelong love of art was acknowledged when the college chose to name the art gallery in his honor. He died in 1984.

Wallace Ludwig Anderson, respected Robinson scholar and author of Edwin Arlington Robinson: A Critical Introduction (1967), planned to publish a comprehensive collection of Robinson's letters, transcribed and accompanied by annotations. A 1967 Guggenheim Fellowship enabled him to study Robinson documents held by numerous repositories as well as private individuals. The forthcoming volume was announced at the 1980 Modern Language Association Conference. The news was welcomed by colleagues thwarted by Robinson's difficult handwriting.

died of cancer in 1984 with the transcripts largely completed but the manuscript unfinished. The family donated the materials to Colby College Special Collections in 2001.

The Wallace Ludwig Anderson Archive comprises 30 linear feet of research material, transcripts of Robinson’s letters accompanied by notes, photographs, and manuscript text related to the unfinished publication. The transcripts and accompanying notes, in particular, are an invaluable resource for Robinson researchers. The archive is arranged in five series that preserve ’s original order.