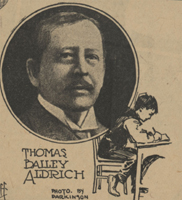 Thomas Bailey Aldrich, a Portsmouth native born in 1836, was a poet, short-story writer, literary critic, and editor. Aldrich's work life began in New York at sixteen, three years after after his father's death, in an uncle's business office. He began to write, contributing to newspapers and magazines, and published his first book at nineteen.
He had a lively personality and socialized with many of the New York Bohemian artists and writers of the 1860s, such as Walt Whitman. Later in Boston as the editor of the Atlantic Monthly, Aldrich became friends with Longfellow, William Dean Howells, and Mark Twain, who may have been influenced by Aldrich's entertaining and autobiographical character "Tom Bailey" in The Story of a Bad Boy, one of the first realistic works of juvenile fiction.

Portsmouth, or "Rivermouth," is featured in many of his stories and novels, especially A Rivermouth Romance, An old Town by the Sea and The Story of a Bad Boy (1870).  The Thomas Bailey Aldrich House has been restored and is now a part of  the Strawberry Banke Museum in Portsmouth, New Hampshire.