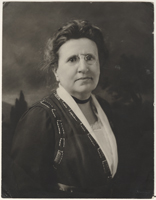 Coburn's family was deeply tied to Colby College. Her father Stephen graduated in 1839, and the Coburn family was critical to Colby's early development as benefactors. Coburn was a co-founder, along with Mary Low Carver and others, of the Sigma Kappa Sorority. Coburn also later attended the Harvard Summer School of Botany as well as the University of Chicago.

Coburn had a major share in the progress of women's education at Colby College and was also a lifelong advocate for the equal treatment of women at her alma mater. She helped draft a letter, with Mary Low Carver, to President Albion Small in protest of his plan to end coeducation at Colby and create a separate womens division, in 1890. Although Small's plan for a separate division went into effect despite protests, Coburn was appointed to the committee on the new Women's Division of the College, and she helped to ensure that women were still being educated to the highest level possible. Throughout her life, Coburn pushed for increased representation of women in all facets of the college. Coburn was the first woman Trustee of the College; the first President of the Colby Alumnae Association, whose efforts gained for Colby Alumnae affiliation with the American Association of University Women; she pushed for adequate housing for female students; and also encouraged President Roberts to appoint a woman as full professor. Dean Ninetta Runnals was the first woman to have full professorship, through Coburn's efforts.

In addition, Coburn was an accomplished writer and poet; among her best known publications are "Skowhegan on the Kennebec," a two volume history of the area, and "Kennebec and Other Poems." Coburn was also a trained botanist and was editor of the "Maine Naturalist." She was active in the Daughters of the American Revolution, and held the offices of State Regent and Vice President General in that organization. Coburn's poem, "Song to Maine," was adopted by the DAR as its state song. Coburn was also active in The Maine Writers' Research Club; and was President of the Josselyn Botanical Society; Vice President of the Coburn Classical Institute; Memorial Park Commissioner, Skowhegan; and President of Coburn Land Trust. She was also active in local Baptist churches, the Skowhegan Town Improvement Society, the Skowhegan Public Library, Skowhegan Women's Club, and many other organizations. Although Coburn did not live long enough to see Colby return to a coeducational system (1969), she had a profound effect on the improvement of women's education at Colby. She died on February 7, 1949 in Skowhegan.