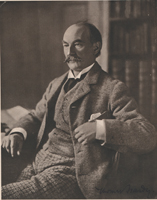 Thomas Hardy was born outside Dorchester in 1840. His father was a builder, and the son was apprenticed to an ecclesiastical architect after being locally schooled. At nineteen he arrived in London to study with the architect Sir Arthur Blomfield and at King's College. He was awarded a prize medal by the Institute of British Architects in 1863. Hardy studied, read, and wrote poetry throughout this time, and continued to practice architecture until it became clear that he could earn a living as a writer of novels. This happened in 1874, with the anonymous publication of Far from the Madding Crowd  in Cornhill Magazine. He was also married to Emma Gifford in the same year. His last book, Jude the Obscure, was published in 1895 to harsh criticism. Hardy returned to writing poetry, completing an epic of England during the Napoleanic wars, entitled The Dynasts. Emma died in 1912, and Hardy married his second wife Florence in 1914. He died in Dorchester in 1928.

The Thomas Hardy Collection was started in the 1930s by Colby English professor Carl J. Weber. It is one of the largest Hardy collections in the United States, containing works by and about Hardy. The holdings include first editions, books from Hardy's library, manuscripts, numerous first appearances from periodicals, sheet music, and over 400 letters written by Hardy and his first and second wives, Emma and Florence.