ARCHIVE: About the Libraries: About 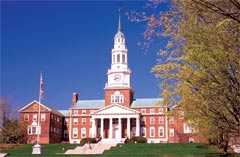 Miller Library, lying at the heart of the Colby campus, was erected in 1939 largely with funds received from Merton Leland Miller (1890, Colby) and dedicated in 1947 to the memory of his parents, William and Esther Pearson Miller. The library was designed by Jens Frederick Larson of the firm Larson & Wells and modeled on Dartmouth College’s Baker Library. Miller, the main library among three at Colby, supports study and research in the humanities and social sciences and houses the College Archives, Special Collections, and the library administrative and technical services offices. An addition that doubled the size of the original building was opened in 1983 and the libraries’ card catalog was automated in 1989. The library provides individual and group seating, wireless Internet connectivity and a 24- seat teaching and computer lab open 16 hours each day. Group study rooms and 24-hour study is provided on the ground level of the Miller building. Among the many services offered are reference and instruction, individual research consultation, and interlibrary loan. The Colby Libraries provide access to a large physical collection of books, journals and media and an equally large collection of digitized and electronic materials. Augmenting Colby’s collections is a close relationship with Bates and Bowdoin Libraries, and a strong document delivery system that provides Colby users with materials from other libraries in New England, the U.S. and abroad. 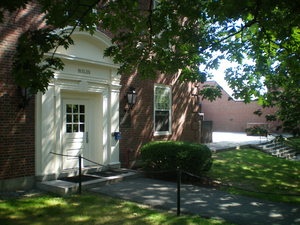 Growing alongside the Art and Music departments at Colby, the Art and Music Library in Bixler has expanded rapidly since its modest beginnings in 1959.  Initially situated in a small room on the first floor now converted to classroom space, the library had a limited number of volumes and no circulation staff. The Art and Music Library has now grown to house approximately ­2,200 reference volumes, 10,000 scores, 30,000 monographs, 11,000 sound recordings and 1,200 videos, alongside study, research, listening , computing, and viewing space.

The Bixler Art and Music Building, originally built in 1959 under President Julius Seelye Bixler, followed a large fundraising effort and the establishment of the Art and Music departments in 1940 and ’41. Both the building and the library within it have undergone many renovations since the initial construction. The first building expansion of Bixler occurred in 1973, when the library was relocated to the space in which it now resides. A large number of volumes were transferred from Miller Library at this time. The Slide and Sound Recording collections were assembled in a room adjacent to the library proper. However, the Art and Music Library still lacked any coordinated management. The first Art and Music Librarian was hired in 1983, which coincided with another renovation of the library, completed in 1984. Although this renovation added shelving space, a closed listening area and improved listening and viewing equipment, the library soon outgrew itself. The latest addition to the library was dedicated in 1992. Improvements included additional shelf space for growth in books and scores, a library seminar room, a new slide library and AV  listening area, ample attractive study space for student use. Since 1992, many enhancements have taken place, including the addition of computing facilities, electronic databases for research, wireless access, and compact shelving for high-density storage of quickly growing art and music collections. In 2010, the old AV center was renovated into a multipurpose open lab and digital classroom for digital art and music. 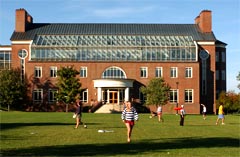 When the campus moved from town to Mayflower Hill, separate collections were maintained within the science departments in Biology, Geology, and one room in Keyes for Chemistry/Physics/Math. In 1978, after the Mudd building was added to the science division, the department collections were merged into the Allyn/Smith Science Library carved out of expanded space in Keyes. The name derived from gifts honoring Bella Keyes Allyn (Keyes Fibre being the previous name of the mill now owned by Huhtamaki), and George Otis Smith (Colby, 1893), longtime Director of the U.S. Geological Survey. Occupying one corner on the second floor of Keyes, with a stairwell leading to the west half of the ground floor, the library quickly outgrew its space. With the advent of computers and the healthy collection growth in the 1980s, as well as a demand for research space in the science division, an urgent need for a fourth science building was identified.

In 1994, after several years of grant applications, Colby was awarded the highly coveted F. W. Olin Foundation grant that provided funds for an entire furnished building. The Science Library moved into the F.W. Olin Science Center in 1996, quadrupling its square footage and providing 110 seats as compared to 25 in the old library. The quality of collection and study space brought the library into the 21st century with network access at every seat in a comfortable and pleasing environment.

The Science Library houses collections supporting biology, chemistry, computer and environmental science, geology, mathematics, physics and astronomy, and science technology studies. A complete collection of U.S. topographic maps is housed on the ground floor. There are individual and group study spaces within the Library, open most days 8 am to midnight. Services offered include reference, individual and group instruction, and science reserve readings. 24-hour study is available in the corridor directly adjacent to the Library.